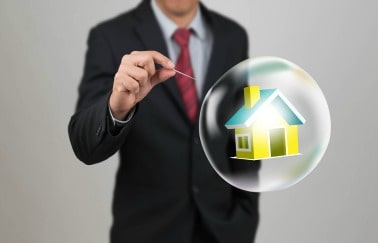 Rumors of a 2017 housing bubble that is set to pop may be exaggerated. The housing market has been in a slow recovery since the mortgage-backed securities crisis of 2007 and the severe economic downturn of 2008.

Given the cyclical nature of real estate, it’s reasonable to expect a correction in the next year or two. But the bubble isn’t likely to burst, because there isn’t one.

According to appraisers, brokers, and other real estate professionals around the country, hardly any markets have seen enough development in the past decade to create a serious oversupply.

Would a 2017 housing bubble impact appraisals?

How are changes in the broad economic picture, and the real estate picture specifically, likely to affect the appraisals and brokerage businesses? It appears that the impact won’t be great on either. A recession or a rise in interest rates could slow the sale of private homes and condos and adjust prices downward.

On the other hand, undersupply remains a problem in most markets, since new construction has been at a virtual standstill for several years. Multifamily rental properties might increase in value since home sales usually go down and rentals increase during a recession.

Appraisers don’t have much to fear from economic fluctuations. An appraiser’s job is to provide a snapshot: the value of the property on the day the appraisal was done, based on the most up-to-date information. An appraisal isn’t supposed to account for what might happen six or 12 months down the line. An appraiser might bring certain information to the lender’s attention, however, such as imminent changes in the local employment picture.

Brokers and agents simply need to stay on top of the news, pay attention to hard data, be aware of seasonal cycles and trends in the local market, and know the limits of their predictive powers.

Industry downturn not expected in the home market

Bruce Ailion, REALTOR and attorney at RE/MAX Town and Country in Atlanta, says that the industry needn’t expect a serious downturn in demand or pricing in the middle of the home market.

If there’s a danger, he says, it’s that some buyers are willing to pay more than the appraised value of the property—which could spell trouble for them down the line.

“We are finding a shortage in moderately priced housing,” he reports. “Buyers of those properties are paying increasingly higher prices for basic housing. On a dollar-per-square-foot basis, I worry they’re paying too much. I advise them as such, tell them the property may not appraise. In most instances, the properties are appraising because cash buyers are paying equal amounts.

“One reason for this price pressure is that builders aren’t building moderately priced replacement housing. As interest rates increase, these homes become affordable to a smaller number of buyers—and demand weakens along with the price. Also, if we enter a recession in 2017 or 2018, as many predict, we will see a weakening in home values. These homes, purchased largely with three to five percent down payments, could then have negative equity and be difficult to sell.”

No 2017 housing bubble in the luxury market

The values of very high-end homes have benefited from the wealth effect of a soaring stock market, Ailion says. But potential buyers of these homes will be less motivated to pay top prices following a 20 to 30 percent stock correction.

“I’ve worked in real estate for nearly 40 years, and these cyclical trends no longer surprise me,” he says. “Appraisers are tasked with assessing a home’s value today: not what the value might be in 24 months. But as an investor, I’m much more focused on where values will be in the future.”

At the very high end—the luxury second home market—sales already appear to be in the doldrums. No bubble exists in that market, at least, although some observers hope that sales will pick up once the political situation stabilizes.

“In the Hamptons, prices are all over the place,” says James R. McLauchlen, of James R. McLauchlen Real Estate and Appraisals in Southampton, New York. “We see tremendous activity in the $3 to $6 million range, but median prices have gone down. In Southampton, the median price for the entire township was $800,000 through the latter part of 2016. In 2015 it was $930,000.

“We hope a resolution of the political situation will improve the market, and real estate will positively react to some of the emotions of the moment. In this market, people aren’t buying to get out of the rain: 80 percent of our sales are leisure/vacation homes. Our buyers come from all over the world, and they’re not sensitive to changes in mortgage rates.”

Keep an eye out for out-of-the-ordinary trends

“Be in tune with how the market tends to behave so that you can spot anything out of the ordinary,” advises Sacramento, California–based Ryan Lundquist, a Certified Residential Appraiser. “We could predict that the market will go down, but when, and by how much, are anybody’s guess. Don’t put your credibility on the line by trying to predict, but do know how to spot trends, and be able to say, ‘Something is changing here.’”

Meanwhile, realtor.com reports that the millennial generation represents the largest buying cohort in history from a generational perspective, and 2017 is shaping up to be a huge year for first-time buyers. Low inventory should keep pricing healthy in most markets.

What do you see in your market? What other thoughts on the “bubble” do you have? Share in the comments below.

Article by Joseph Dobrian. Joseph Dobrian has been writing about commercial and residential real estate, and real estate-related finance, for more than 30 years. His by-line has appeared in The Wall Street Journal, The New York Times, The New Yorker, Real Estate Forum, Journal of Property Management, and many other publications. He is also a noted novelist, essayist, and translator. His website is www.josephdobrian.com, and he can be contacted at jdobrian@aol.com.