News media across North America has created its own winter storm regarding the luxury real estate market. Headlines are clashing with each other, from the New York Times claiming that the luxury market is in a funk to BNN stating that it will bounce back but at a slower pace. Meanwhile, Forbes recommends watching the top luxury trends as the barometer that eventually affects the rest of the real estate market. So, is the luxury market in a slowing trend or has it simply normalized?

Certainly, the overall market has slowed down since the end of 2017, but only in comparison to the fast pace of the previous 10 years, when inventory levels fluctuated and buyer demand outpaced available homes. If we look at the statistics of homes sold over the last 13 months, both the median price point and the days on market have remained fairly consistent. It is only the increasing inventory that is causing a shift in the balance from a seller’s market to a buyer’s market.

Looking at these statistics with an eye on the first few months of 2019, it is clear that inventory levels are still growing. However, this is only to be expected as we transition from the winter market toward spring—with inventory remaining in the popular winter destinations where the season hasn’t quite finished coupled with the growing anticipation and recommendation by real estate agents to get ahead of the spring rush.

The following illustrative graphs reinforce the marked stability of the luxury real estate market over the last 13 months. Reviewing inventory levels* for the single-family luxury market, availability ranges from approximately 33,500 to upwards of 42,400 properties in any given month. However, these fluctuations are actually in line with seasonal shifts. 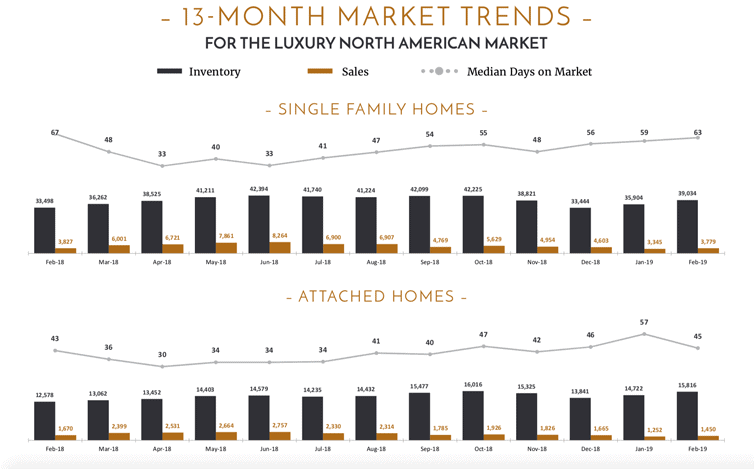 *These numbers are based on the 60+ markets featured in the Luxury Market Report.

The luxury attached home market showcases an almost perfect visual for a stable market, with the only drama being a significant increase in the number of days on market during January 2019. But this was an anomaly, as numbers fell back within expected parameters in February 2019.

If all things remained equal, then we could state that we are back in a normalized market. However, we must recognize that there are some powerful outside influencers that are predicted to affect the spend of the wealthy. Contentious politics, punitive taxes, rising interest rates and talks of recession are factors that could negatively impact the market.

Conversely, the growing number of high-net-worth-individuals—over 22 million—and their increasing investable income—currently over $61 billion—provides an insulation for the wealthy that, while not making them immune, does lessen the influence of economic fluctuations.

This could be the reason for so many conflicting reports on the status of luxury. Quite simply, high-end buyers and sellers do not play by the same set of rules as the rest of the market. Not only are they a little more insulated, but their financial decisions are lifestyle-driven—which, in turn, translates into less predictable fluctuations, trends and purchases. As a side note, many real estate experts believe that these decisions often create a ripple effect through the rest of the market, which is slower to react but eager to follow.

While luxury homes may take longer to sell than in previous years, the slower pace, increased inventory levels, and larger differences between list and sold price represent a normalization of the luxury real estate market, not a downturn.