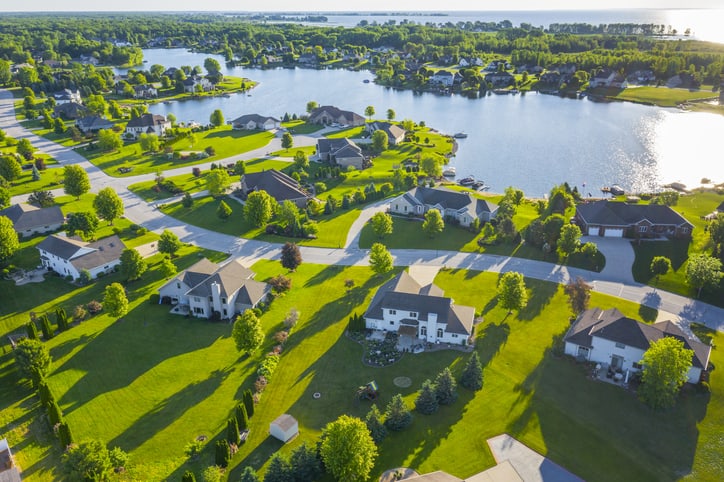 Does your subject property really front on the water?

You might remember a case that made national news some time back involving a six-foot-high pink stockade fence erected between several houses and a small lake (actually just a large retention pond). Purchasers of the homes in what was a brand-new subdivision chose those specific lots and paid extra for them, not only because they backed up to the water, which afforded access and a view of the pond, but also because they avoided neighbors backing up to their lots, and because it provided the opportunity to catch the occasional bass or bluegill.

Unfortunately, their property lines did not run to the water’s edge. In fact, although not in a perfect straight line, the lot lines generally fell an average of about 8 feet short of the water’s edge.

Making a very long story short, an enterprising individual investor discovered the gap and legally acquired that 8-foot strip between the lots and the water’s edge. He then approached those homeowners and offered to sell them the 8-foot strip behind their individual lots at a pretty hefty price.

The homeowners balked at the proposal as well as the prices, and they united to fight this investor. In retaliation, the investor put up a stockade fence to block their access and views, and then painted it pink, which got the attention of CNN news.

Eventually, through mediation, a settlement agreeable to all parties was negotiated by which the investor made a modest profit, and the owners got their water frontages. The subdivision developer, builder, sales staff, surveyors, appraisers, brokers, as well as attorneys from all sides eventually were involved.

Some developers do it differently

In many cases, the developer will plat the lots surrounding water retention ponds so that each lot has a triangular wedge going to the center of the pond. That way all the land, including the submerged land, is conveyed and the purchasers assume responsibility for said water body. That was obviously not the case in the above example.

This second method sometimes causes challenges in making lot size adjustments. Appraisers should be careful not to double adjust for the water frontage and for lot size. I know of a case where the lot’s square footage, including the submerged portion, was twice the size of standard lots in the development. That could make for a difficult series of decisions on allocating adjustments.

Had a gap myself

Years ago, I purchased a weekend cabin on a canal off of one of Florida’s rivers that had a lot that also fell short of the water’s edge. In my case, it was only one foot short, but I didn’t own that strip, and technically anyone could have boated up to the land and stood there on that one foot and fished all day long if they wanted to.

Since that experience, I’ve been highly motivated to verify where the property line was drawn relative to a body of water in my appraisal assignments involving subject properties adjacent to water.

With many water fronting properties, the topics of “riparian and/or littoral rights” (and the “prior appropriation doctrine” in the western states) come into play, along with several other issues. Those topics are fodder for other lengthy blog posts all by themselves. Appraisers should familiarize themselves with their state laws regarding water frontage and related rights, as they can vary from state to state.

Among the rights that come with real property ownership is the right to exclude others. When oceans, lakes, bayous, estuaries, rivers, streams, and ponds are involved, this right is a large part of what property purchasers are paying for.

Another case in Florida involved a stretch of beach where property deeds showed they owned down to the mean highwater line of the Gulf of Mexico. Property owners chose to ban the public from walking along the water’s edge because they claimed such individuals were trespassing. They erected signs prohibiting public access. A legal battle ensued involving state and local jurisdictions, and in that case the signs came down and the public won the right to walk along the water’s edge.

Should an appraiser investigate where the property line is in relation to the edge of the water? I could go on with many more examples, but the end result is the same, and the answer is absolutely yes.

What about an off-site water view?

In a large townhouse-style condominium complex, there were only eight units that had water views. The view was of a section of the Intracoastal Waterway. It was from the second floor only, and over a six-foot high concrete block wall and across an open field. The builder charged more for those units because of the partial view.

My research discovered that the open field had just been purchased by a group that was building a four-level high-and-dry boat storage building. That bit of news made quite a few folks very unhappy and had a distinct impact on the value of those units. The moral of this story is that when you see open land between your subject property and the water, review ownership and the local building and zoning department’s comprehensive land use plan.

Final thoughts on the topic

I recommend going online and searching “buyer concerns in waterfront property” or similar topics. There are many eye-opening lists of concerns you may not have considered that may relate to your next water-related appraisal assignment.

Appraisers should investigate ownership of what’s beyond any surveyed property line. I would think researching what abuts all sides of any subject property, as well as the comparables, in any appraisal assignment would be done by all of us, but in waterfront and water view properties extra steps are most often warranted.

At the very least, when no survey or other readily available source can confirm where the owned property ends and the water begins, it might be a smart idea to utilize either the “subject to” option or an extraordinary assumption addressing related rights or any gaps in ownership between the property and the water.