Appraising specialty or niche properties—like commercial properties, luxury homes, historic homes, etc.—can be both enjoyable and profitable. With the help of our appraisal community, in the past we’ve had fun exploring questions such as, “What sports stadium would you like to appraise?” and “What fictional luxury home would be fun to appraise?” Since March is National Reading Month, we recently asked appraisers, “What famous literary home would you want to appraise?” Here’s what they said.

What famous literary home would you want to appraise? 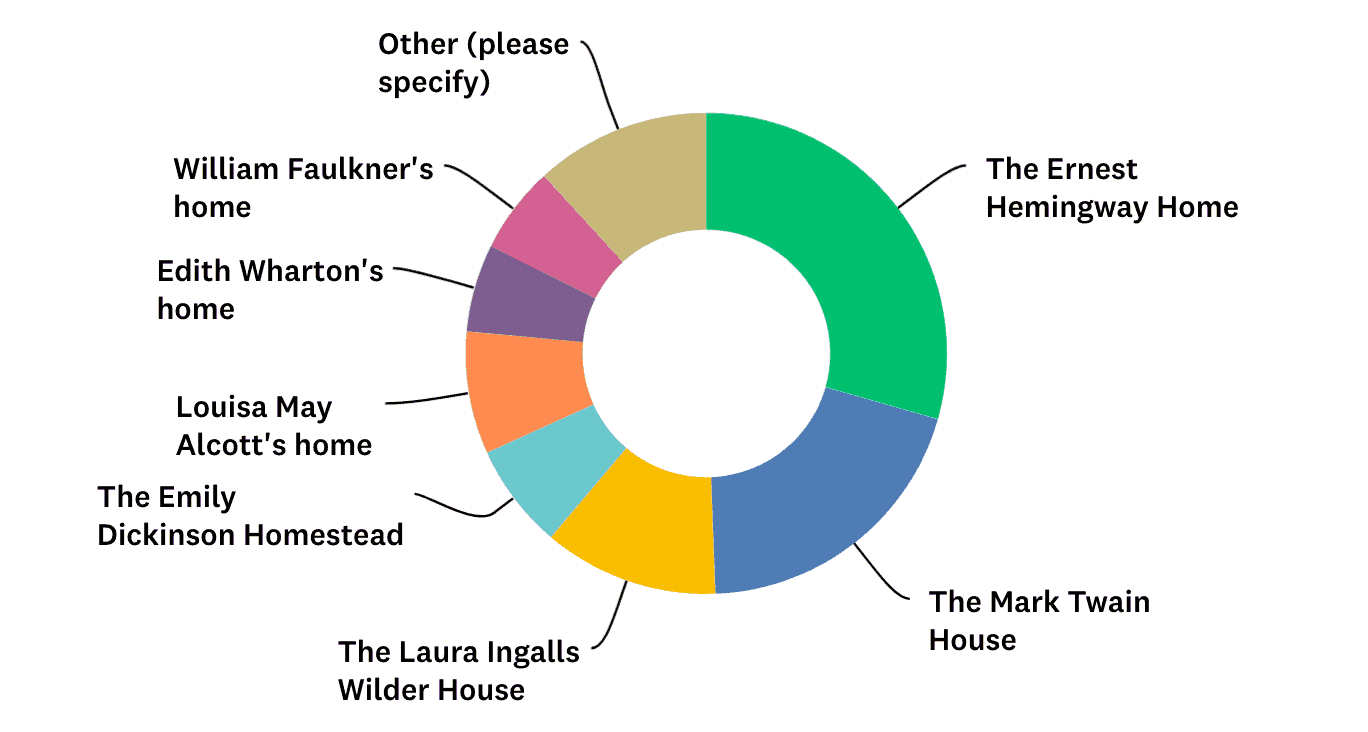 Want to participate? Sign up for our newsletter to get the next “Question of the Month” survey delivered to your inbox.

The most popular answer, selected by 29% of survey respondents, was the Ernest Hemingway House in Key West, Florida.

“I would want to appraise the Ernest Hemingway home because he had a home here, where I currently live and work, and because there is such a rich history of his life here, and it would also be considered a special use property as it is now in the ownership of a non profit for cultural programs.”

“I have been in this property. The architecture is amazing throughout. Would love to learn more of the history.”

“I was only able to see the outside of it as it was closed to the public the last time I was there. Would love to see the inside. Fabulous location.”

“I am a huge Ernest Hemingway fan and have always loved reading his books!!”

“Being in Key West and housing more than 40 cats, the house has character, first built in 1851, and everyone knows what a character Hemingway himself was. It would be a honor to appraise his property and get a feel for the man.”

“My wife and I love Key West and cats, so this would be a win…win. ”

The second-most popular answer, selected by 20% of survey respondents, was the Mark Twain House in Hartford, Connecticut.

The home, in which Samuel Clemens (Mark Twain) lived with his family from 1874-1891, was built in the American High Gothic style and has been described as “part steamboat, part medieval fortress and part cuckoo clock.”

The Laura Ingalls Wilder House (a.k.a. “Rocky Ridge”) in Mansfield, Missouri received 12% of the vote, coming in third place overall.

“Laura Ingalls Wilder’s home would not only invoke the curious exploration of ‘something more’ but it would also invoke the inner child in me who wished for simpler times while watching Little House on the Prairie.”

“I loved that show as a child and it brought me such pleasure. I wanted to be part of that family. It would be awesome to see it much less appraise it.”

“Grew up watching the show and it would just be fun to have that experience.”

Louisa May Alcott’s Orchard House in Concord, Massachusetts received 8% of the vote, coming in fourth.

“Who wouldn’t want to appraise a house that is over 300 years old! An historic home in Concord, MA – appraising landmark homes is not like appraising ordinary properties. The challenge of finding comparable sales, the replacement cost, looking at the distinguishing features, how it was built and so forth. Is an historian needed to validate the subject or even the comps?”

“When I was in 3rd grade, I read Little Women, and I was fascinated with it and its author. I moved out of state at the end of that school year, and my beloved teacher gave me a Louisa May Alcott biography. I loved it, and I have always had a fondness for the author and her home.”

“It would be exciting to get to appraise such a beautiful historic piece of the past.”

The Emily Dickinson Homestead in Amherst, Massachusetts was selected by 7% of survey respondents, coming in fifth place overall.

The homestead was Emily Dickinson’s birthplace and home from 1855-1886. Her poems were discovered there, in her bedroom, after her death. The property included a 1.5-acre garden that was tended by Dickinson along with her mother and sister.

Edith Wharton’s home, called The Mount, received 6% of the vote.

A country home located in Lenox, Massachusetts, the house and its grounds were designed by Edith Wharton herself. Wharton wrote several ghost stories throughout her career, and The Mount is rumored to be “haunted.”

“In college I took a course in Southern literature where I learned about Faulkner and his home. I ended up actually building a home with a large front porch with a swing. Many mornings and evenings we would sit, listening to the sounds of nature and enjoying the peace of sunrises and sunsets.”

“Seeing interesting properties is one of the perks of this career.”

Twelve percent of survey participants selected “Other” and wrote in their own responses as to what famous literary home (or other historic home) they’d love to appraise. Answers included:

What famous literary home would you want to appraise, if given the opportunity? Join the conversation! Follow us on Facebook, Twitter, and LinkedIn. Or, sign up for our newsletter to get a new survey question in your inbox each month.