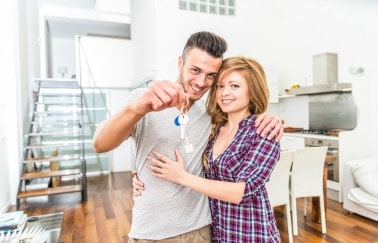 The ranks of first-time homebuyers may have been dropping in recent years. But that trend changed with more newbies entering the market last year, an upswing expected to continue in 2017, according to Realtor.com. Although only 33 percent of homebuyers last year were first-timers, 52 percent are projected to be this year. And 61 percent are under age 35.

It’s a significant shift in housing, Realtor.com reported. Competition is even fiercer for affordable housing. New homebuyers are worried about financial issues such as coming up with a down payment and finding a home within their budget, according to the National Association of Realtors (NAR) publication.

Because they tend to be younger, they often come to the market saddled with student loan debt, have lower incomes than other homebuyers, and “don’t have equity from a previous property to roll into a home purchase,” she said.

For those reasons, affordable housing is a prime concern for first-time home buyers. Among its housing predictions for 2017, real estate brokerage Redfin expects: “Markets able to offer buyers new construction at affordable prices will take center stage in 2017 since many first-time homebuyers have been priced out the starter home market in more expensive metropolises.”

The starter-home shortage has worsened for first-time homebuyers in the past year, according to Trulia’s most recent quarterly report in December 2016. The online real estate site says there are particularly large shortages in coastal areas such as Tacoma and Portland, but also in Miami and the California metro areas of Sacramento, Los Angeles, San Francisco, and San Diego.

The last quarter of 2016 saw the steepest year-over-year decline in inventory in three years with the number of homes available for first-time homebuyer falling 12 percent since 2015, according to Trulia. New homebuyers were paying nearly 2 percent more than the previous year to buy a starter home in their local market, spending 39 percent of their monthly income.

Toward the end of 2016 more first-timers entered the market, particularly Millennials (ages 28 to 31), Redfin said. Millennials made up more than half—56 percent—of first-time homebuyers, according to Zillow.

First-time homebuyers are particular about amenities

Their tastes in housing were very particular. For instance, they didn’t want a fixer-upper, Redfin reported.

About 40 percent of first-time homebuyers surveyed by Redfin chose design quality, floor plans, and finishing touches as the top features they look for in a home. These surpassed other factors such as green space, 34 percent, length of commute, 32 percent, and property taxes, 15 percent.

Safety, privacy, and more space indoors and out were also key interests for first-timers, according to Realtor.com.

To get the finishes and designs they want, they’ll have to buy in more affordable cities such as Raleigh, Austin, or North Point (Florida), Redfin said.

Once they find their first home with all its extra amenities in an affordable neighborhood, they don’t seem to have plans to move anytime soon, according to NAR. In fact, 75 percent of first-time buyers surveyed by Bank of America early last year said they’d prefer to bypass the starter home. Instead, they wish to buy a home that meets their future needs, even if that means waiting to save more for their home. And 35 percent plan to retire in that home.

Still, they are more likely than repeat buyers to be torn between buying and renting with almost 40 percent considering renting, Zillow reported.

NAR’s Hale offered these tips for those getting ready to buy:

Find out more about ensuring your homebuyers can get the financing they need in our course Helping Buyers Narrow in on Their Dream Home.